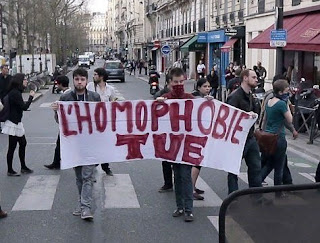 Clément Méric, a 18-year-old from Brest (French Britanny), was first year student at the Faculty of Sciences Po in Paris. He was a leftist activist and joined the Antifascist Action group which has been mobilized in recent months in favor of legalizing gay marriage in France. In the photo above, with his face covered by a red scarf, Clément holds a banner with the slogan: L'homophobie tue (Homophobia kills).

On Wednesday afternoon, in a pedestrian street in a central shopping area of Paris, the young student was with three friends when they casually met a group of skinheads. After an exchange of insults and threats, the two groups confronted in a fight that did not last long. According to eyewitnesses, Clément received fatal blows and fell unconscious on the street. Taken immediately to Hospital, he died yesterday afternoon without regaining consciousness.

The tension lived in France for several months between supporters and opponents of the gay marriage bill has generated hatred and violence fueling extremist groups.

Police has arrested four people aged between 21 and 37 years in the town of Saint-Ouen, bordering Paris, when they went to the local police station to surrender.

Interior Minister Manuel Valls has said: "There is no place for small neo-Nazi groups whose enemy is the nation". And he added: "A group of the extreme right is at the heart of this assassination. There is a discourse of hate and a climate that favors this discourse. We need to pay attention to this because they threaten our values".

The perpetrator of Clément's death will be charged with "willful murder", has declared François Molins, Prosecutor of Paris, at a press conference this Saturday.

Countless homages, demonstrations and protests against this death have taken place in France today