Is It Time for Australia? 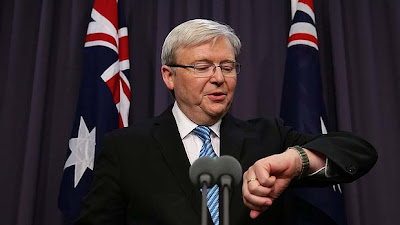 Australian Prime Minister Kevin Rudd has said today he wants a vote in Australian parliament to legalize same-sex marriage, just months before an election. He believes all MPs should be allowed a conscience vote on the legalisation of marriage equality.

Rudd wants Australia to join neighboring New Zealand and a dozen other countries in the world that have already granted same-sex couples the right to marry.

"I am now the first prime minister of Australia who is a fully signed-up supporter of marriage equality", he said. "I would like to see this done. This causes so many people unnecessary angst out in Australia in the gay and lesbian community", he added.

Rudd was sworn in Thursday as prime minister a day after he ousted rival Julia Gillard (an opponent of gay marriage) in a ballot that returned him to lead the Labor party and the government.

Curiously, Rudd opposed gay marriage during his first term as prime minister some years ago, but now tells he has changed his mind after discussions with several people including his daughter Jessica.

The fact is polls show a majority of Australians now support gay marriage.

Maybe it's finally time for Australia...