The House of Lords in Favour of Same-sex Marriage Bill 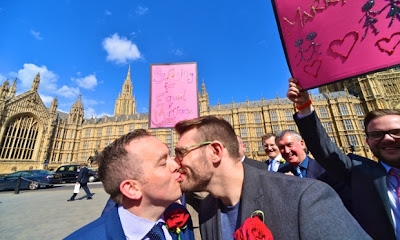 After passing in the House of Commons last May 21, the House of Lords has just passed at second reading the same-sex marriage bill for England and Wales, this Tuesday evening.

After two long days of intense debate, in which more than 90 Peers have explained their position on marriage equality and showed deep divisions, the Britain's Upper House has finally passed the bill for 390 votes to 148.

The landslide vote for gay marriage was greeted with cheers from supporters of gay marriage outside the Parliament in London.

The House of Lords scrutinises the bills that have been approved by the House of Commons, and it can reviews and amends them. It also can delay bills and force the Commons to reconsider its decisions. But it's highly unusual for the unelected peers to block a bill of government that had received the support of the elected Commons.

Now, the same-sex marriage bill will go on to committee in the Lords, where it will be scrutinised line-by-line on the floor of the Upper House, but in any case the bill has just passed a crucial hurdle.