DOMA: It's Time to Get Equal! 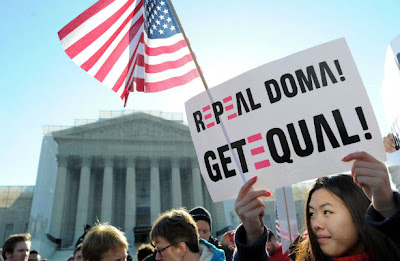 The Defense of Marriage Act (DOMA) denies recognition to legally married same-sex couple in U.S. since 1996. DOMA's Section 3 defines marriage as the legal union of one man and one woman, thus prohibiting the federal government from recognizing legal marriages between same-sex couples. Those couples are subsequently denied a long list of important protections and responsibilities, including Social Security survivor benefits, immigration rights, family and medical leave, and the ability to pool resources as a family without unfair taxation.

For example, because of DOMA, tens of thousands of legally married gay and lesbian Americans are not able to petition their spouse for a green card or apply for a fiancé visa to bring their partner abroad to the United States. DOMA causes married bi-national same-sex couples to face the real threat of being torn apart because of expiring visas or deportation. The result for many couples is that they are forced to live thousands of miles apart and only able to spend time with their husband or wife for weeks at a time. Other couples are exiled from the United States all together, and must relocate to another country in order to live with their spouse. Read the David & Jason story.

On March 27, the U.S. Supreme Court heard oral arguments in a case wich was a challenge to the DOMA's Section 3. A majority of justices raised questions about the Act, indicating the Supreme Court may strike down a key part of the law that denies legally married same-sex couples the same benefits provided to heterosexual spouses. The Supreme Court has to wrap up its docket by June 24, then is expected by the end of June to issue a ruling on the constitutionality of DOMA.