A Big Demonstration in Copenhagen Against Russian Anti-Gay Law 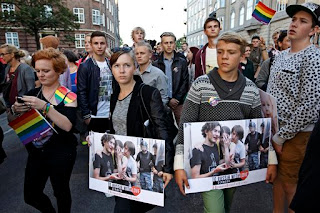 Ten thousand people attended a demonstration in Copenhagen (Denmark) against the Russian laws banning the promotion of non traditional relationships and the adoption of Russian children by foreign same-sex couples.

The movement, called To Russia With Love Denmark, asked for action and condemnation of the anti-gay laws and stigmatization of LGBT people in Russia.

Organisers of the protest had expected two thousand people to the rally, but five times that number took the streets in the Danish capital.

Watch the following video about this protest.