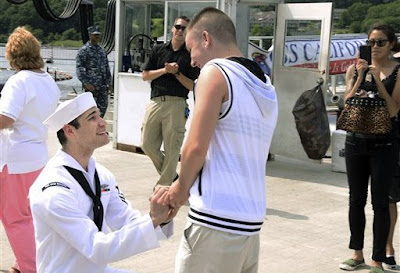 After six months aboard the USS New Mexico, travelling more than 34,000 miles in the European region, Petty Officer 2nd class Jerrel Revels emerged this Monday from his submarine, dropped to one knee and proposed to his boyfriend Dylan Kirchner.

The romantic scene was during the homecoming celebration at the Naval Submarine Base in Connecticut, amid a crowd of more than 200 relatives and friends who were gathered on the dock to greet the returning crew. The fact is people looked at the proposal and applauded.

Kirchner said: "It kind of tickled my mind every now and then that (he would propose) but I never expected this". And he added: "I didn't really care everbody was around. It felt just like the two of us".

For now, the couple has not set a wedding date.

Defense officials estimate there are 18,000 same-sex couples in the active-duty military, National Guard and Reserves. While, same-sex proposals and weddings among U.S. military personnel are continuing to make headlines since the 2011 repeal of Don't Ask, Don't Tell.

Congrats to the couple!