Obama Has No Patience For Russia's Anti-Gay Treatment 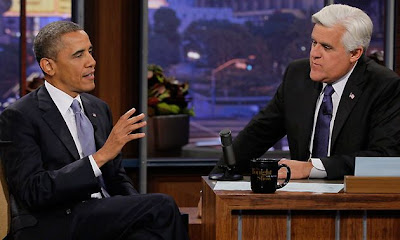 President Obama criticized the new Russian law cracking down on gay rights, during an interview with Jay Leno on NBC's The Tonight Show!.

The U.S. President said "I’ve been very clear that when... you are discriminating on the basis of race, religion, gender or sexual orientation, you are violating the basic morality that I think should transcend every country". And he added: "I have no patience for countries that try to treat gays and lesbians and transgendered persons in ways that intimidate them or are harmful to them".

Obama continued: "One of the things I think is very important for me to speak out on is making sure that people are treated fairly and justly because that's what we stand for, and I believe that that's a precept that's not unique to America. That's just something that should apply everywhere".

Russia has said it will enforce the law when it hosts the 2014 Winter Olympics, but President Obama thinks "Putin and Russia have a big stake in making sure the Olympics work, and they understand that, for most of the countries that participate in the Olympics, we wouldn't tolerate gays and lesbians being treated differently".